The “OM” symbol is often associated with Yoga practice and symbolizes the ultimate connectedness in the universe. The word is pronounced with three syllables - Ah -Uu -MM, representing three states of being: waking state, dream state, and dreamless state. Equally important after these three syllables is the silence that follows, representing infinite consciousness.

Yoga with Piedmont Healing and Defensive Arts is designed to facilitate mobility, healing and relaxation through instruction in the traditional practices of Vinyasa Yoga, which generates heat, as well as Yin yoga, it’s opposite performed slowly in a cool environment. We also share the Bando Yoga practices, which have been used since ancient times in Burma and surrounding regions to assist in healing and improved health.

The word Yoga is derived from a Sanskrit word meaning “union”. Practicing yoga fully involves a union of mind, body, and breath. The broader definition of Yoga includes meditation practices that harmonize one’s entire being with the broader world around us. Yoga is not a religion, though, and does not require someone to change their personal beliefs to benefit from a yoga practice.

Each of the yoga styles we share supports your health in complementary ways:

Vinyasa Yoga: The word “Vinyasa” means a transition, with breath, from one posture to another. This type of yoga practice helps to develop aerobic capability with improved strength and flexibility, as students learn to link breath and motion in moving from one posture to another. The movements naturally heat the body as well. Vinyasa yoga movements, whether performed outside or in a heated studio, result in heating the muscles and help release internal toxins that may be stored in the body.

Yin Yoga: While Vinyasa generates heat, Yin yoga is its opposite, performed slowly in a moderate to cool environment. Yin practitioners move gently from one pose to another and hold each pose anywhere from one to five minutes. The poses do not involve strength - these are passive positions working with gravity to gently allow the body to relax. Instead of focusing on the muscles, Yin yoga targets connective tissue such as the fascia, which is stretched across the muscles and organs. Yin is about letting go - letting go of your expectations, of trying to get into a pose, and of the impatience that may come from the desire to move out of one posture into another. 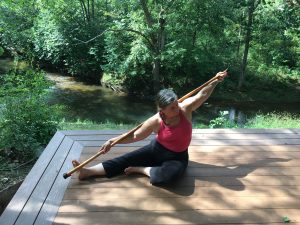 and in Dhanda Yoga the staff also signifies the spine, which is the basis for all movement. Dhanda yoga techniques were used in ancient Burma by workers and slaves to help their body deal with the stresses from long hours of physical labor. The purpose of the staff is to serve as a way of aligning the spine and the associated muscles. It can enable deeper stretches and provide support for postures that might be difficult. Twisting movements, aided by the staff, help massage internal organs and support internal health.

Longi Yoga: The word “longi” refers to a long piece of material used in Burma (Myanmar) as a type of clothing on the lower body. In Longi yoga a long rope is used, with loops at the ends for each hand. Longi yoga targets the muscles, tendons, and ligaments. Similar to how a yoga strap can help with alignment and deepen a stretch, the longi yoga techniques enable the practitioner to align the body, to stretch and straighten muscles, or even to massage them. Tension is maintained by wrapping the rope around the hands and/or holding the rope taut with the feet, thus creating a natural massage of reflexology points in the hands and feet.

Letha Yoga is performed with a partner. One person serves as the “receiver”, and while performing a posture, the other person, the “giver” can assist by deepening the posture, massaging muscles that might not be easily soothed through self-care, or assisting with alignment. Energy healing is also incorporated into Letha Yoga, with the giver using her or his palms to transmit healing energy (generated through breath) to the receiver.

Ashtanga Yoga is a particular style of yoga developed by Pattabi Jois in India; most vinyasa style yoga practices have Ashtanga Yoga in their lineage.  It is generally done in an unheated environment and consists of a pre-defined sequence of movements that are believed to help heal the body. The Ashtanga Primary series is a fixed sequence of movements.  You can find led classes (where the teacher sets the pace) or "Mysore-style" classes where each student works at their own pace and the teacher offers individual suggestions based on the student's progress.  We offer a led half-primary class.   If you are interested in formal Ashtanga practice in Western Prince William or Fauquier County, see the Ashtanga Resource Page to see other opportunities to practice in this tradition.

For the duration of the Pandemic, yoga classes at the Riversbend Studio will be offered via Zoom only.  Outside events, such as Dhanda Yoga, will still be available in compliance with current regulations.   For more information, contact Debby Kirkman (see contact page).

Yin Yoga classes are held at the Riversbend home studio in Warrenton, VA. Dates and times are listed in the current schedule.  In addition, you can experience Debby's Yin Yoga classes on Thursday afternoons at Transform Power Yoga in Haymarket, VA.

Ashtanga Yoga Half-Primary:  This 75 minute class is offered once a week on Wednesdays, and includes a selection of poses from the Ashtanga Primary Series.  Currently offered via Zoom only; cost for Zoom classes is $10 (drop-in) or $30/month if paid in advance. Check the Event calendar  for class date and times.

Individual instruction may also be arranged.